In 2018, ‘Odissi on High’ was premiered at Kuala Lumpur and had an overwhelming response. The production is an outcome of renowned Odissi dancer and founder of Malayasia-based Sutra Dance company, Ramli Ibrahim’s collaboration with Guru Bichitrananda Swain, veteran Odissi performer, choreographer and founder of Rudrakshya Foundation. It was the coming together of two styles and two paramparas. The title, ‘Odissi on High’, says it all. The production puts Odissi truly on a high with two exponents entering into a creative alliance. The opening night of the Malaysia-India 2019 tour of ‘Odissi On High’ at KLPerforming Arts Centre, Kuala Lumpur, showcased the energy and spirit of the two performers, their training and approach.

I happened to watch a rehearsal session at Ramli’s Sutra Dance Company as ‘Odissi on High’ gears up for its India tour. The place was buzzing with activity with both the gurus and disciples enjoying the singing, dancing, discussions and debates. Artist, lighting and set designer Sivarajah Nataraja, who is also the stage manager, watches every rehearsal closely. “I do not understand ragas.
To me, it is about what emotions and moods it evokes,” he says. He makes notes as he watches and soon has a book full of doodles and patterns.

When we watched the performance on the opening night, it seemed magical.
It was a poetic essay of graphics, lighting and dance. There was no disconnect anywhere — the graphics were done with an understanding of dance and lighting and lighting, with an understanding of dance and graphics. Around 80 lights were used to create a canvas of dancers on stage. 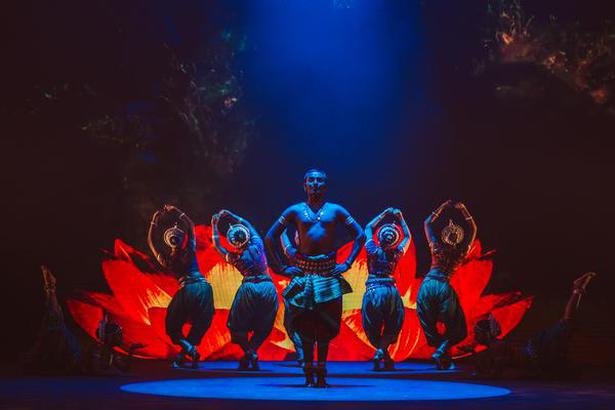 “Will you be able to recreate the same magic with lighting in India,” I ask Sivarajah. “The aesthetics will not be compromised. But I will have to make do with the available lights,” he replies. Motion graphics are by Wei Jun. The stage is washed with subtle light as the musical notes emerge. A dancer seeks Lord Krishna, and the two engage in a dialogue of movement. They appear and disappear, signifying the soul’s search for ultimate truth.

Space expands and more dancers and many Krishnas flow in and out of the stage in different formations to the strains of a Pallavi in Raag Kolabati. It concludes with the song ‘Sangeene re’ by Banamali Das, evoking the mood of love and the dance sequence that unfolds is an experience of ananda rasa. The original dance composition for this by Guru Debaprasad Das was adapted to a group composition by Sutra Collectives.

The Mukhari raga Pallavi that follows explores the dynamics and contrasts of the tribhangi and chauka postures in Odissi. The performance peaks with the next rhythmic composition, ‘Tala Taranga’, choreographed by Guru Bichitrananda Swain. The musical score made use of instruments such as mardal, mrudanga and khanjani to compose in one taal, with variations in rhythmic patterns and laya.

The predominant focus of Odissi as a dance form personifying the female body took on a new dimension with the focus on the male body with performers of the Rudrakshya Foundation. The choreography is a mix of speed and stillness, dynamism and subtlety and stances and movements.

The dancers are bathed in pools of square spotlights and the graphic of the Konarak temple in the backdrop creates an ethereal feel. It feels as if the sculptures have come alive. Brilliant dancing by Samir Kumar Panigrahi, Santosh Ram, Jagandatta Pradhan, Sanjeev Kumar and Bichitra Behera makes it an aesthetic experience and the thunderous applause is richly deserved.

Ramli Ibrahim has adapted the classic Sankarabharanam Pallavi, choreographed by Guru Kelucharan Mohapatra 60 years ago for solo dancing, with stunning effect, into a group composition, which makes for a visual statement.